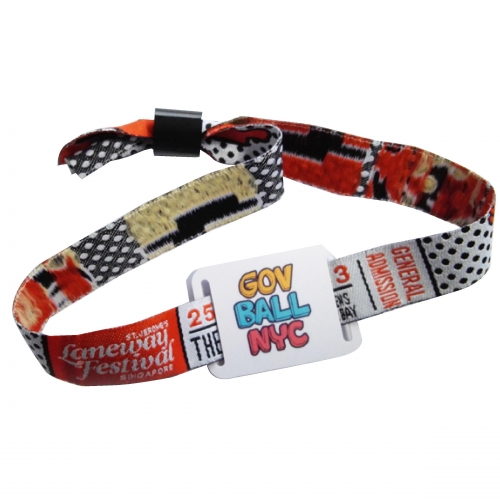 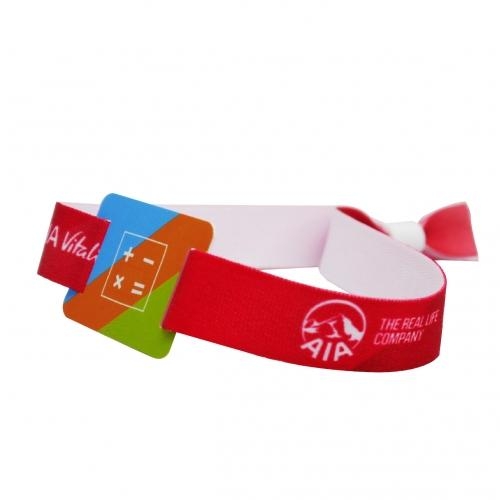 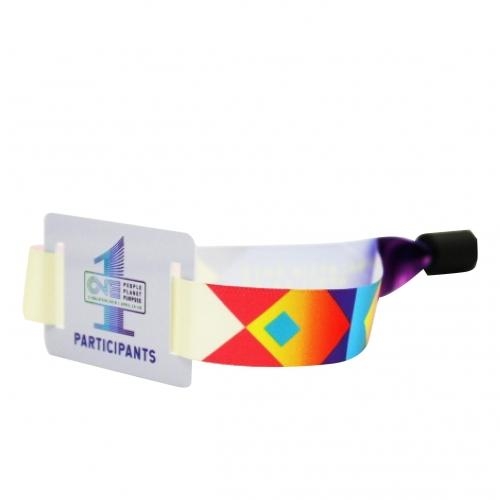 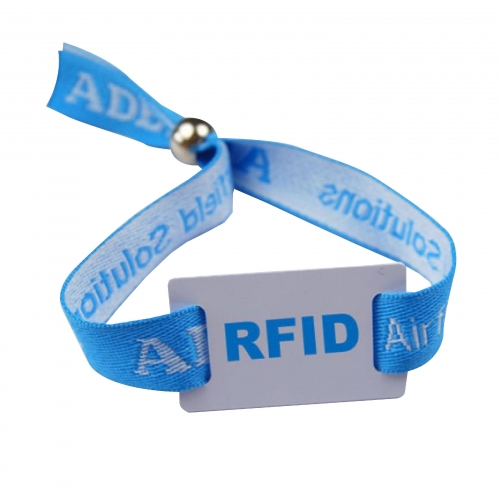 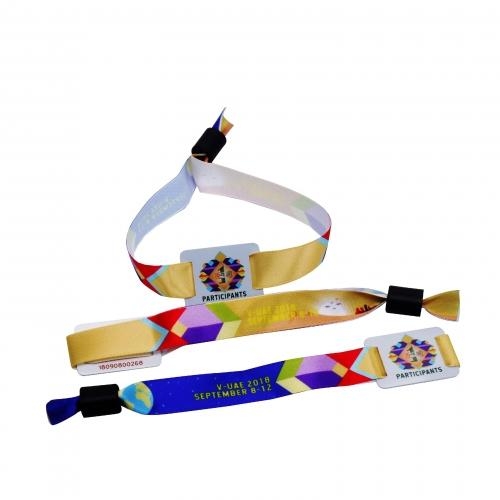 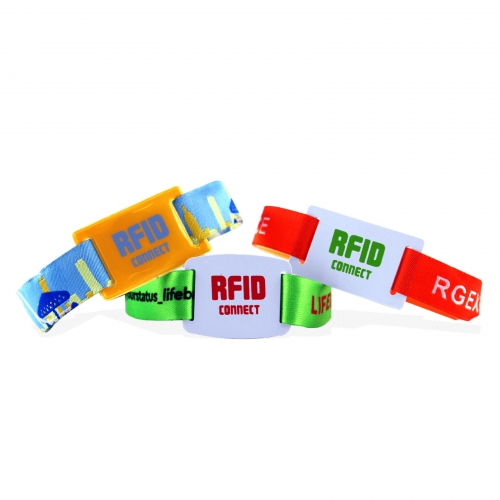 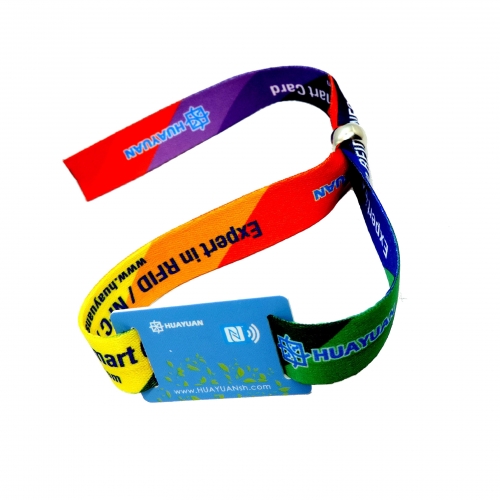 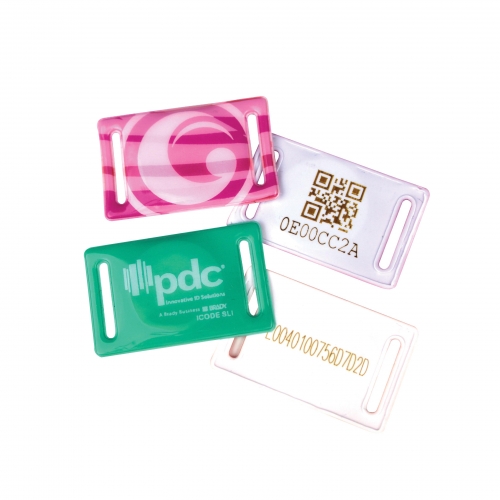 *This Fabric Wristband Is Non-Transferable Of One-Time Usage Only! 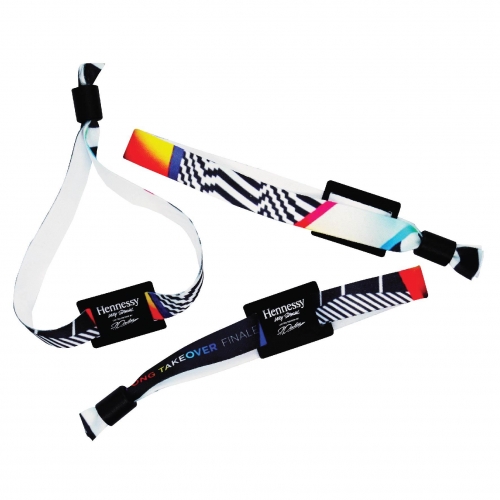 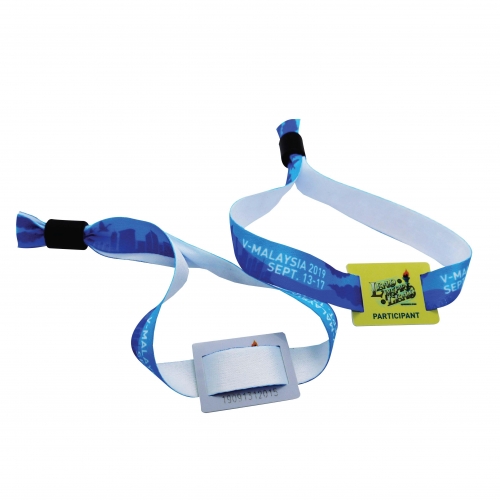 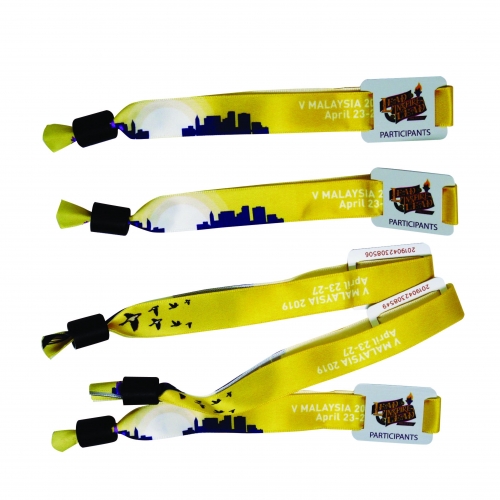 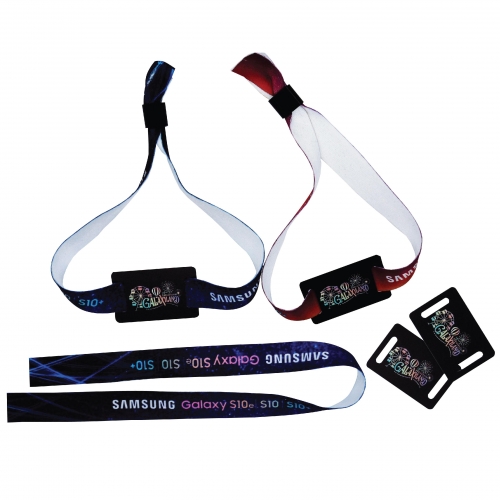 That which is said of free riders or gate crashers have been the bane of any concert out there, this is the modern inception of a technological marvel—through the intervention of an RFID card—that puts a full stop towards these uninvited guests. And how it's done so is by breaching the pioneering advancement of NXP semiconductors to be mixed with traditional fabric bands, making an occasional bracelet wearable only for permitted fans to enjoy lavishly within the festivity. The outcome is known widely in today's world as the 'RFID fabric wristband,' introduced after a stark-raving craze of product experimentations between material usage and innovative combinations by bracelet suppliers. For these bands are used specifically in gated entries only, permitted to be opened when the RFID cards prompted a response back - as well as signifying the authentication of an event ticketing passageway in order to enjoy the following entertainment.

In the beginning, several iterations came to be with the RFID fabric wristband. And like its name, these changes were centred towards the materials of those bracelets but also in RFID technology. Cottons were used then - which brought the uncanny calling of a cloth wristband. And before the introduction of NXP's Mifare Ultralight EV1 chip that is now catalogued for mass production, other variants of NFC (near-field communication) like Mifare Plus or Classic were used onto these bands instead. Yet all versions of the RFID fabric wristbands were predominantly seen among the concerts to combat against the same cause, that in the scale of time and trend observation by band manufacturers, these bracelets became synonymously known also as the 'music festival wristband.'

And even more of a fact that the brains behind this ingenious armband invention have truly thought of all complicating scenarios – especially centred towards how NFC Mifare reacts, in the form of radio frequency that the bracelet absorbs as well as also re-transmiting, in order to make the RFID fabric wristband a huge success. It’s hugely recognised as the bracelet features a contactless smart card that is battery-free, keeping the usage purposeful, convenient, and only through appropriate energy contact that the band’s RFID chip (within the smartcard) becomes powered to function. With that, this ability that was purpose-made from the combination of the near-field communication alongside the band industry coins this bracelet as having a passive tag capacity.

So, fret not of the bandwidth of radio waves found that may result in disruptions or misintepretation, the RFID fabric wristband activates only to the corresponding hertz reading that the band is programmed to do - through the well-developed Mifare Ultralight EV1 integration into its mechanised bracelet which allows for absorption and re-transmission. And in that specification, the armband reads and addresses the only low-level frequency of 13.56 MHz.

All in all, bracelets like this are abundantly applied towards the corporate gifts field, of which UDesignConcept as a wristband supplier deals only with B2B. Yet through this band supplier's sales observation, the cloth wristband tends to be seen in exhibitions held in a hotel, or as stated of the festival RFID usage. And standing alongside with the silicone bracelet or tyvek wristband amid addressing various ethical problems, the trio bands can be considered to be a part of the disposable wristband line for greener and reusable effort. This means that each and every components found within the RFID fabric wristband can be recycled—from the integral chip found within the contactless smart card (where the passive inlay tag is molded to) which can be dissolved in order to salvage metals, to the flat polyester fabric that the bracelet was built with.

But two primary reasons brought the thermoplastic (polyester) into the designing of the woven fabric RFID wristband:

1) First, within a time setting where vegetative yield like cotton were scarce in supply, the alternative bracelet cost-to-production efficiency spells for the exploration of the man-made, organic chemistry material that sets the trending revolution of the RFID fabric wristband.
2) Second, daily conditions like rain and dirt could have also stained the predecessing fabric, causing the wrist band to be soaked unlike the water-resistant polyester. And moreover is that such a bracelet in a crowded music festival environment may be easily torn, consequentially leading to polyester becoming preferred in the manufacturing of this RFID fabric wristband.

The bracelet also feature a generous length of 350mm with 15mm height, and can be adjusted further with a clip found in the RFID fabric wristband - just so it's secured appropriately during his/her attendance, whereas the attached card is merely 35mm length by 26mm height. This is small enough as to prevent unnecessary hindrance, yet the band remains adequate to be detected within a proximity of 10cm - when approaching the gates of any Mifare card reader.

Pricing of all RFID fabric wristband has been well-thought using parts, printing technique and materials centred to cheap costing. As a matter of fact, the NXP's Mifare Ultralight EV1 was taken into this bracelet in favour of high-volume applications. Added by the readily accessible woven fabric body, CMYK printing is used to achieve a full-coloured hue while meeting the same objective.

All wristband mockups can be given by the administrator of a company, or equally a service of designing may be asked. This is to be finalised before the file becomes transferred, in order to make a few sets of bracelet-specific substrates. These series of substrates, or base, is coated with colours of cyan, magenta, yellow, and also key in potential combination, in order the bring vivid hues into the RFID fabric wristband.